Slept wonderfully last night! It ended up being a cool night and with my rain fly off it was indeed very chilly. Which is perfect because it allows me to sleep warm inside my sleeping bag without getting hot.

It was so restful.

I woke up ready to go. This morning however Planner and Alex struggled a little bit with motivation. It has been a common theme that has been passed around to each of us. Some days we just don’t want to walk.

The morning started with BIG rocks up on knifes edge.

I have a love hate relationship with these rocks. Love because they allow me to get into a flow state. Where all my thoughts are directed at which rock I am going to next and how I am going to place my foot because if I do a wrong step, it could end very badly.

So I get into the zone.

I like to pretend that I am playing hot lava like when I was a child. I actually sometimes get so into it that when the rocks start to space out and it is very easy to walk again on the dirt path, I keep hopping from rock to rock until finally I realize that oh yeah… it is not actual lava.

Hate because well…they hurt my feet.

I spent the morning walking with Powerade and Colby Jack who we have leaped frogged with for the past couple days.

Today was going to be a tough stretch because water was scarce. We all had to chug water at the next shelter and then fill all of our bottles to hold us for the next 10 miles and at camp.

I arrived at the next shelter, sat down for lunch and got a text from Alex saying that there was trail magic at a parking lot a mile from the shelter.

So I packed up my stuff and headed down.

It was perfect. It was a man named Ragwart who hiked the trail last year after he retired and he was with his wife. I absolutely adored them. 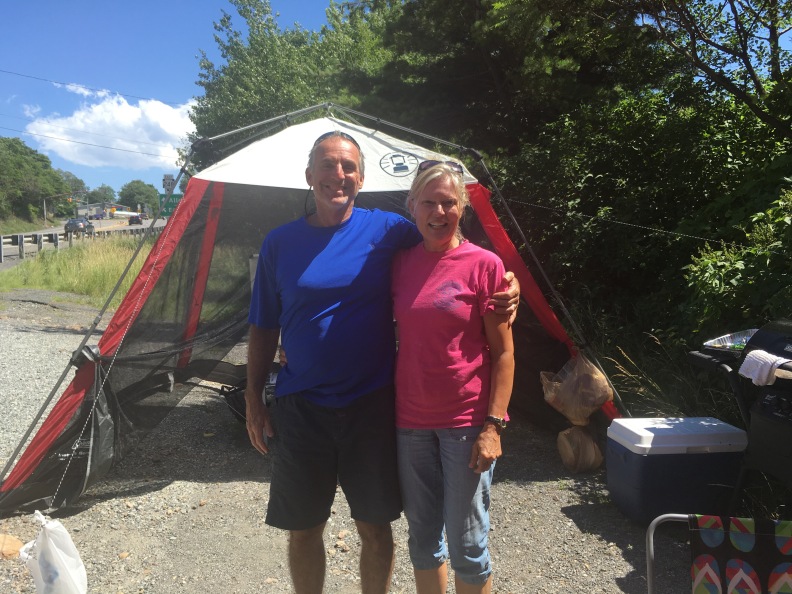 We had hot dogs, chips, and cookies. They even kept pushing us to pack out food too.

Planner and I actually ended up staying there for about 2 hours. Yet again another long lunch. But we didn’t really care. We really appreciated talking to this couple who came up from Flordia.

The trail magic was at the base of Leigh High gap. A very rocky mountain that we soon had to go up. While sitting there we could look up and see hikers climbing up the very top. They looked like tiny ants.

We both loaded up on water that we had to carry for the next 10ish miles and for the night. We had to drink very carefully.

We hiked up Leigh High Gap and it is by far my favorite climb yet. 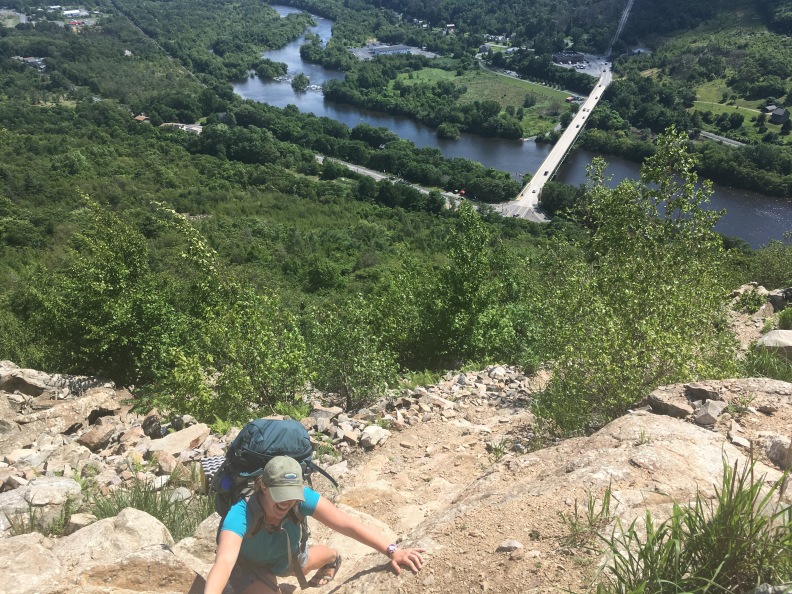 We literally were rock climbing and you can look down and see everything below.

This wall was no joke…straight up. I looked at it and smiled. This is SO fun.

Before I left trail magic I let them know I would wave to them and when I reached the top I let out a big two handed wave to the red little tent I saw and Ragwart stepped out ( I Could tell by the blue dot) and he let out a big double hand wave back.  It warmed my heart.. such a great couple of people. 🙂

We climbed more rocks and then finally made it to some solid flat trail on the ridge line. It was beautiful. 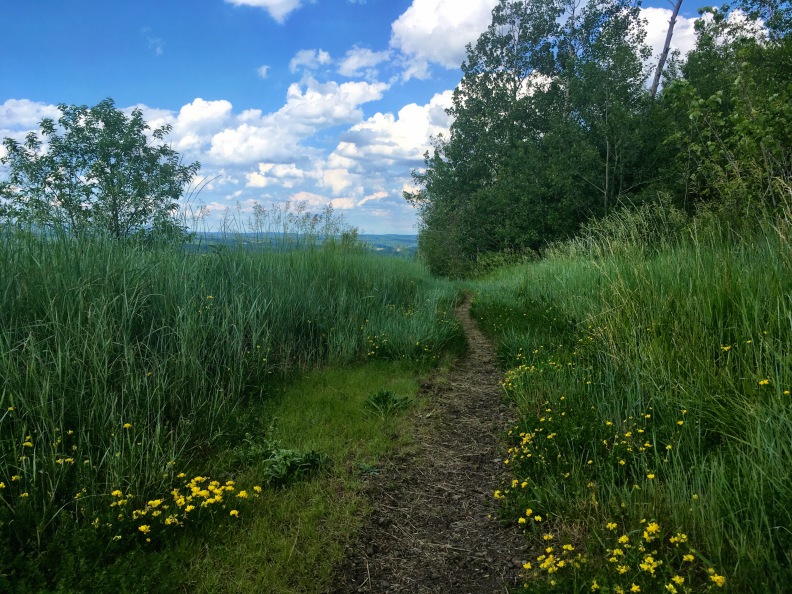 We even ran across a ton of wild berries.

I started thinking we should call Planner berries instead. She is quite knowledgeable about plants… it is awesome. We ate blackberriess..

Then I came up to another bush and said “hey, these don’t look like blackberries, they look like raspberries!”

She let me know that I was right and I was SO proud of myself. 😉

We even had some blueberries.

I wish they were everywhere! Notice how small they are when they are not loaded with hormones.

We got to a busier highway later and Planner spotted a sign for some kind facility. She stopped us and said she really wanted to go and see if they had water.. We were down to 1 liter that had to last us for another 5 miles, the night and morning and another 6 miles to the next shelter.

So we walked and saw that it was a Blue Mountain Resort and stood there trying to decide if we should walk the extra mile to refill on water or not.

We started to stick our thumbs out to see if we could get a ride. I told her…lets wait here for 5 minutes, if we dont get anything then we can head back to the trail.

A few cars past us and then while we were talking Planner yells at me, “It’s a subaru!! Stick your thumb out!”

So we did and a nice young gentleman named Dave pulled over and took us to the facility where a wedding was happening.

We didn’t know what to do because we did not want to crash the wedding. Dave offered to take us to his mom’s house who lived about a mile down the street, or to a gas station. We weren’t really wanting to waste too much time because we were already going to be arriving late to camp.  So we stood around trying to negotiate what to do and then I spot a lady wearing a name tag, in professional clothes, putting boxes in her car.

So we did and she did work there and let us in the back to a water fountain to use. 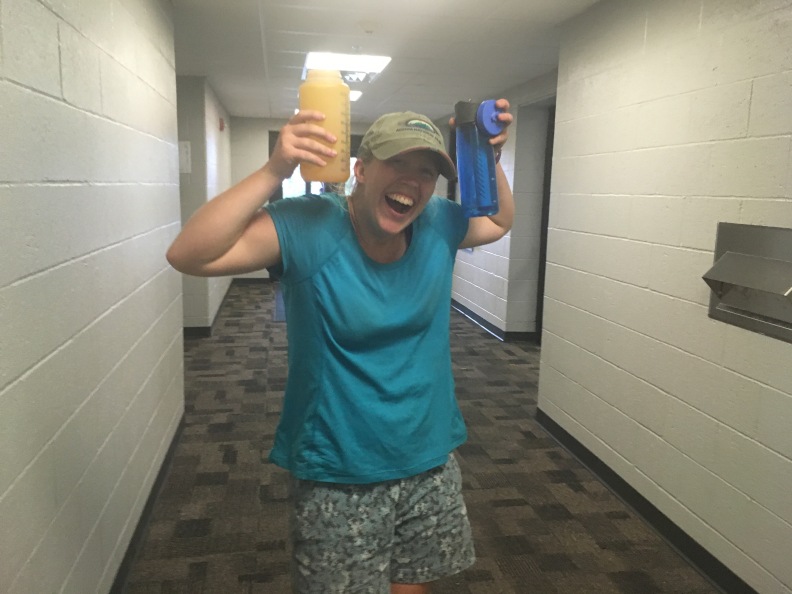 We were so happy. So we chugged probably close to two liters, refilled and Dave drove us back to the trail head.

We were so lucky.

We hiked 5 more miles and made it to camp around 9.

We set up tents without rain flies again and ate dinner with our head lamps on.

Planner told me she hit trail magic earlier on too. I always just miss it!! But thankfully she was nice enough to share her pretzel with me.

I Forced myself to sleep in this morning since we got to bed so late last night.

I was not looking forward to the day. Another long day with minimal water. Not my favorite.

I was last to leave camp and had to cut a part of my new shoe. Blue suit told me that if there was ever anything wrong with my shoes to just cut it and make it better. That you dont always have to get new shoes. 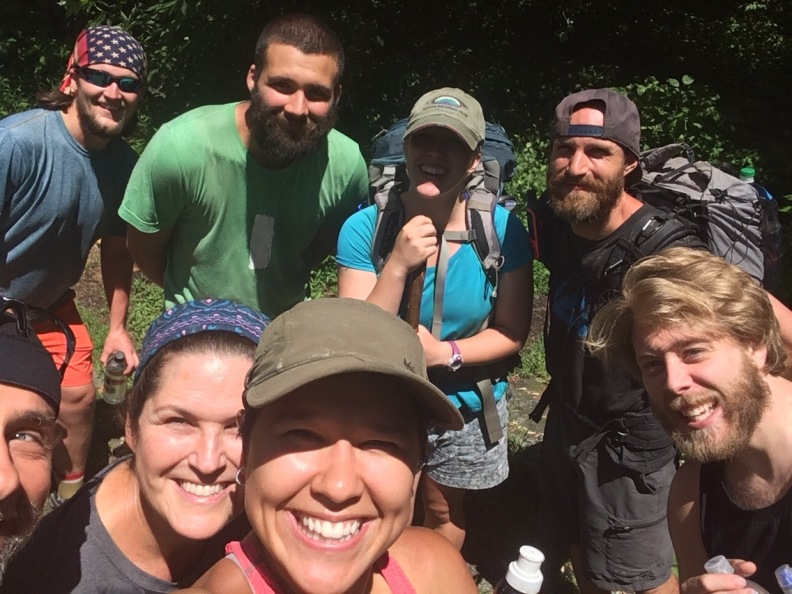 Ignore my squinty morning eyes.. In the back from the left is buffalo, cashew, planner, Alex and in the front is fiction, non fiction (really awesome couple), me, and jet pack.

Today was filled with rocks. I was told northern PA is worse than southern because of the rocks.

That deemed to be true.

We arrived at a our camp site earlier than normal which was awesome since we had two late nights previously.

Even better…Our camp site is awesome!!

Tomorrow is town day which is much needed. Laundry, resupply on food, and we might even watch a movie! YAY!