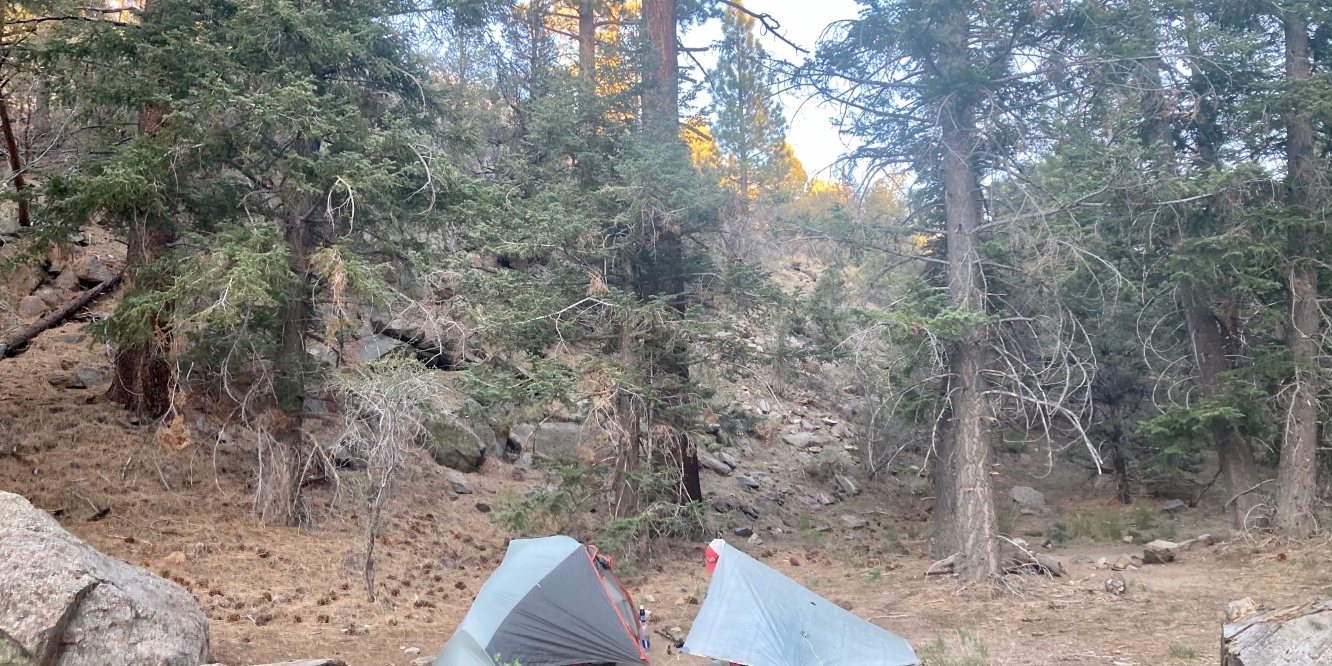 This morning was quite a unique one. Around 4:30 am Planner and I were awaken by a mariachi band, or what seemed to be one. In the far distance we could hear the music blaring and loud foot steps approaching right by our tents and then we could hear the music and foot steps fade away further down trail. Both of us were startled but I found it hilarious as the music tried to make its way into my dream before waking me up.

I then ate some oatmeal and drank some coffee and we were on our way by 6 am.

We unfortunately had a few more miles of crossing around the river and had to play the eye spy game of searching for rock cairns to figure out where to go.

It slowed us down for sure but it also made me feel so satisfied when I would find them peaking out. The first photo shows them laid out nicely, but this next photo is more or less what we initially saw.

We then spent the majority of the morning climbing back up to 8,000 feet which was tough but once we were up top we then had miles of what felt more like rolling hills.

It was going smoothly and we had the daring idea to do 27 miles to the next water source.

At our last water source of the day (17 miles to the next one where we were to camp) we sat for a second to eat and fill our bottles. While sitting there we met another hiker from Georgia who goes by “Daddy” and got to know each other a little bit. After sometime our attention fled to a young squirrel (I think?) that wasn’t afraid of us.

I have never been near a squirrel that wasn’t scared of humans. We were pretty sure that it had been fed human food from hikers before as it kept creeping closer and closer to me. It got so close that I actually got nervous. Once again Planner and I were questioning what is the protocol if a squirrel angrily came at us. (Luckily a squirrel is way smaller than a cow)

Mid day I put on some music and was truly enjoying myself and the trail. Happy that I was for now done with the really hard stuff for the time being and embracing what was before me with fresh feet and legs.

That was until we rounded a mountain and off in the distance I pointed out a spot of cloud/fogs/smoke in the distance above the ridge line. We weren’t sure what it was but both of us instantly felt pinches in our stomach. We kept our eye on the fog and then Planner searched up wildfires in the area with the minimal service she had. We didn’t really feel that it was a wildfire, but we couldn’t help that thought that was in the back of our minds, since it has been a really dry year.

We then started hiking very quickly. I also used our Guthooks app to see which direction we were heading and the trail proved to go around this area and up north ahead of it. Okay, as long as we weren’t heading straight for it.

We started talking back and forth of what we should do “if” it got worse. I then decided to use my Garmin Inreach device to reach out to my boyfriend so that he could verify there was nothing on the web about any fire near us. (Shout out to Garmin for making such a stellar lightweight, simple device. That always makes me feel safe!!)

He let us know there wasn’t. Perfect.

Planner and I then came to a dirt road with an older man walking to his car and we asked if he had heard anything or seen anything, he let us know that, that morning on the news there was only one but it was small, contained, and far south. He also told us he was North on the PCT and didn’t see anything. We were both relieved. What we hated most though was that we weren’t crossing ANY other hikers. This drove us nuts.

Finally after about 4 hours of charging up and down the mountains with basically no break, we ran into another thru hiker heading in our direction too. He let us know he was heading to the same camp ground as us and that his trail name was “Dude”.

After Dude left down the trail, we decided it was time for a well deserved break after many many fast paced miles. We both relaxed and were excited to only have 6 more miles to our campground. We were absolutely killing it.

The last 3 miles or so, Planner and I had become way less anxious and more so loopy/delirious. We found ourselves talking and laughing. Oh gosh… laughing and giggling about things that weren’t even funny but we were just on a whole other level. Kind of like when we were kids, where the laughter is just continuously contagious.

Once at camp we crossed a couple of people that we deemed were not thru hikers and felt like they were confused why we had so much energy. Little did they know that after so many miles, our loopiness was on full blast.

I am also very happy to report my feet hardly hurt the entire time. Earlier on in the day Planner exclaimed “New shoes, new you!” as I couldn’t be stopped on trail.

I think it was the shoes, the rest, and the little bit of anxiety that had me hiking like a champ.

We set up our tents and were extremely happy to see other hikers around.

We both were also proud of ourselves for being aware of our surroundings and constantly having a plan of what we should do if, IF, anything crazy was to happen.

Once again, this darn trail has me all over the place but I am learning how to be flexible with it and find the enjoyment.