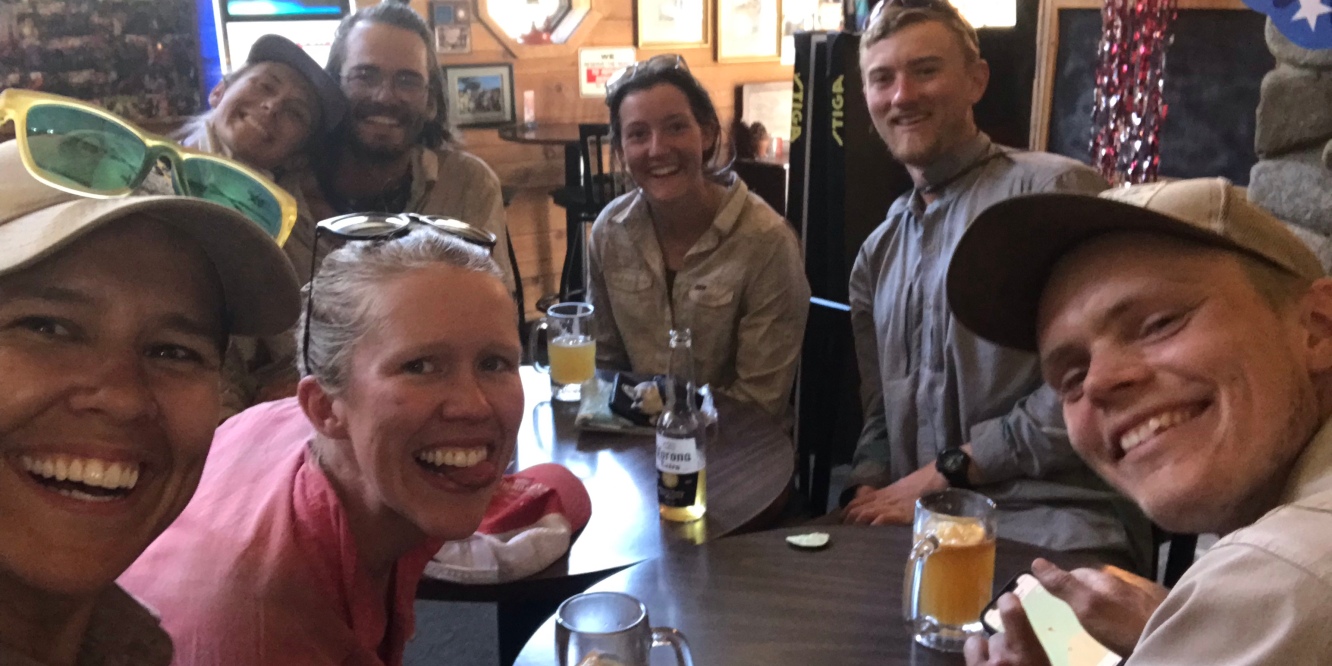 I surprisingly slept decent enough cowboy camping. I woke up every so often I think because of the brightness but I am definitely looking forward to trying it again!

I did however get up from my sleeping bag and had a small cockroach crawling down my leg, unsure if it was in the sleeping bag with me or if it got on me outside of it… 🤔

Regardless, look at the sunrise we we’re able to have!

We were excited for today because it was a town day. We had a very hard 16 mile day and then could get a ride into Wrightwood.

Most of the day was filled with climbing uphill to around 8,000 feet.

It was hard, but with a town in the back of our minds, we kept trucking on with minimal breaks.

Most of the hikers around us were all planning to head into town as well. We have definitely found ourselves in what one would call a “bubble” of hikers.

Towards the end of our hike I started thinking about how I am already becoming stronger physically and mentally. I feel like I started out so anxious and worried but as I am proving to myself that I can climb these mountains… it in return is growing my confidence in myself.

For the last couple hours I plugged in my headphones and listened to my one and only Jack Johnson. It felt nice to have his peaceful melodies and beautiful scenery around me.

I arrived at the highway with Some Guy and saw the few other hikers we have been around; Tide, Lightening, and Bottleneck.

We started sticking out our thumbs and then finally got a ride from a lady named Marlene. She was actually a known trail angel from town that had just dropped off other hikers. Making trips back and forth since she had the time to. She had let us know that the town was extremely busy this weekend as it is Memorial Day weekend.

This made sense to us since Planner, Conrad, Gator, and I couldn’t get a hotel. Thankfully, there was a list of trail angels we could contact that would let us stay with them!

We contacted a couple named Jeff and Cindy and they said they had space and would get us around 5 pm.

We got into town around noon and went straight for food. We went to a place called Bigfoot Bowls that had amazing food.

I got a big breakfast burrito and an açaí bowl that were the bestttttt.

We then decided since we had time, to go to a nearby bar and get a few beers. Being around other hikers really does make us all feel better. This trail isn’t as populated as the AT in the least bit, which is why some choose it, but it’s still fun to get to know one another.

Some of us also got tipsy/drunk off of a couple beers. Thru hiking in the desert will do that to us I suppose. 😂

After a few hours we grabbed more food from Bigfoot Bowls, I could not get enough of that açaí deliciousness.

Then Jeff came to pick us up and took us back to his house!

As soon as we pulled up we knew it was his, such a trail angels house.

Jeff and his wife had 2 spare bedrooms perfect for us! He showed us the shower and then asked if we wanted to do laundry.

Planner and I had been hand washing our stuff up until now so we were stoked to not have to.

I then also noticed out my back window was a pony!! So of course I asked Jeff to pet it and he let me feed it watermelon and carrots. 😁

We spent the evening getting to know Jeff, he let us know that they had been trail angels for 15 years and told us the longest someone had stayed with them was for a few months and the most people that had stayed was 18 at one time! How insane!

It was such a relaxing evening. There is something just better about staying in a home instead of a hotel. It’s cozier and welcoming!

Even though we are keeping tomorrow equally short, we are all exhausted by 8 pm and will head to bed soon.