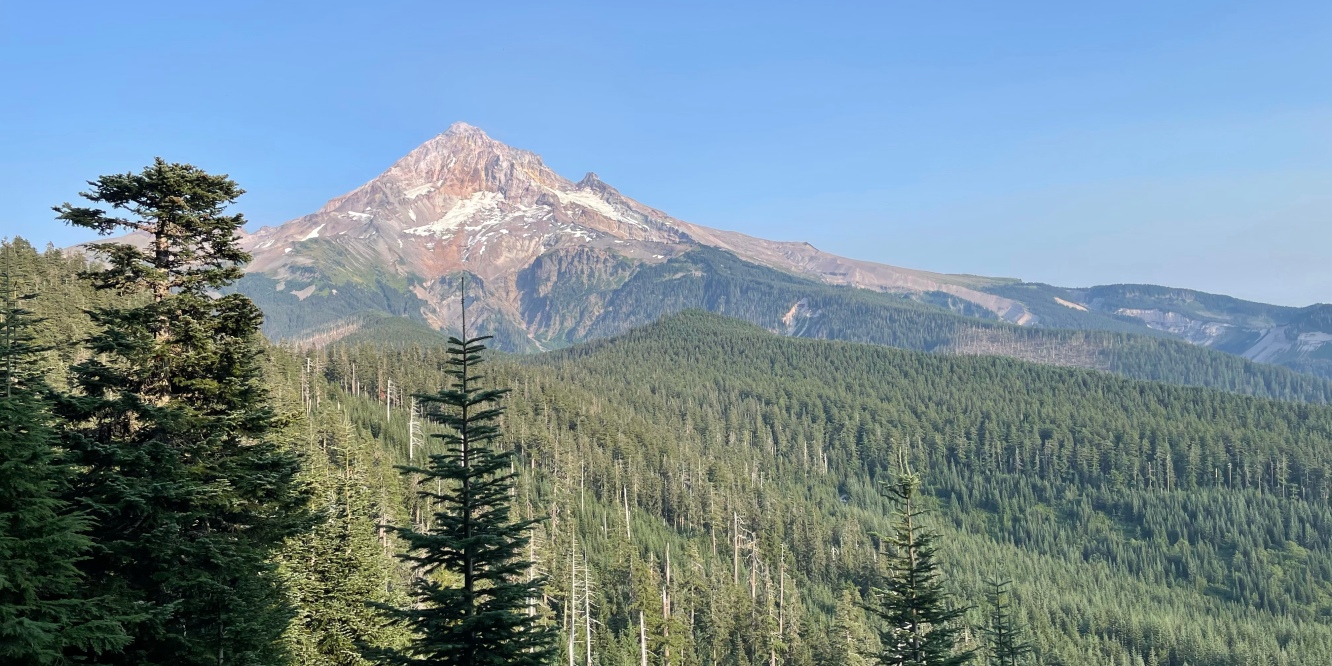 We woke up early this morning again since we had to hike 5 miles by 8 for our Timberline Lodge breakfast reservation. I wasn’t entirely sure Babs’ father was going to come back early to take our backpacks to slack pack us, but to our delight, he did!

So this morning Goldie and I were able to give him our backpacks and only carry water for the next 5 miles uphill to the lodge. I was so thankful. It felt incredible to not be weighed down by a backpack. I cannot wait to get back into some trail running!

Our climb up was something else. It led us to fantastic views of Mt Hood. It felt like we were in the front row seat once we got to the top of the climb. The top half was covered in smoke/fog, but still, it was beautiful.

We arrived at the lodge with plenty of time and once everyone arrived we were seated.

The lodge felt like a fancy place and I felt some what out of place but all of that disappeared as we neared the buffet. It was time to eat!

They had toast, waffles, yogurt bar, fruit, eggs, biscuits and gravy, potatoes, pastries, and sausage. Those cheesy eggs were to die for. Mhhh so delicious.

We finished our breakfast and went out back to some lawn chairs and enjoyed the cleared up view of Mt Hood and let our stomachs digest.

While there Babs let us know that she was going to get off trail. It was sad to hear and sad to see how hard of a decision it was for her. Sometimes we place this pressure on ourselves to finish something that we no longer have the heart or motivation for.

She said she had been contemplating it for weeks and felt like it was the right thing to do. She definitely wasn’t ending on a bad day either.

It hurt. We all want everyone to reach Canada but we are also very proud of her. She had come so far and a lot further than most people. It wasn’t quitting, it was a congratulations. You made it so far Babs!

Around 11 we said our goodbyes to both Babs and her dad for the last time and set out for the second half of our day.

We had some big elevations changes again and were now well fueled for it.

While I was charging up one of the mountains I ended up recognizing Ellie from the AT! She was who gave me a hitch back to trail from Trail Days and invited us to stay with her in DC if we wanted to stop by. She had let me know that she was going southbound on the PCT this year but I wasn’t sure I was actually going to cross paths with her.

I let out an ecstatic “Ellie!?” And we caught up for a while and then wished each other the best for the remainder of the trail!

I left her smiling, sometimes the world really did feel so small!

I continued with some more climbing and then had a big descent down to a river. There we sat and ate lunch before continuing on.

Afterwards we came to a pretty intense river crossing. Not going to lie, it was raging and I felt my heart speed up. It was the first time I was nervous with a river crossing.

I told myself to not think about it and found myself humming and walking along quickly before jumping to the flat other side.

Go fast and don’t psych yourself out.

All of us made it across and then headed up the trail for a mile before taking a short alternate to see Romona Falls.

This was another route that we were told had a phenomenal waterfall and to take it.

So like we do, we did. We took the trail and came up on Romona Falls with smiles. They were right, this was so worth it.

The falls were gushing out cold water and a breeze and I even had the perfect tree chair to sit in!

It was a nice spot but we couldn’t dilly dally too long. We soon headed back out to the trail for another 5 or so miles.

In the evening I noticed a bright sign between the bushes.

Yes! Trail magic! As I approached the trailhead, I noticed the van and then I noticed the woman and man! It was Susie and Eric from a week or so prior! I was thrilled! I gave her a big hug and let her know I was happy to see her again.

She had made a black bean and rice mixture that I devoured. I had mentioned to Goldie that I had written about her in a previous post and was excited to see her again. Goldie then made me show her my blog and she then wanted me to read it out loud for everyone to hear. I then made Goldie read it instead.

I was beyond embarrassed! I like writing my blogs but I am also very shy about it, I’m sure in some way it was good for me.

We had four more miles to hike so we said our goodbyes and I told Susie I was hoping to see her again. We set out rather quickly as the sun was falling fast. We made it to camp later than I like but I was happy with the day.

Time for some Z’s!