Headed out around 11. Later per usual. We all slept in and slowly moved around.

But I felt better. It was exactly what I needed. It was like a big relaxing sigh. I was ready to get back to the trail.

We decided we were going to try and hitch back.

We had a fellow hiker stop with space for 3 so planner and I decided to let the 3 boys go since it is easier for us women to get a hitch.

About a couple minutes later a car comes circling around and a couple pulls over and tells us they will take us where we need.

The couple however were from Russia, they had been living here for a while but still held heavy accents.

It was so neat to chat with them for the ride.

They commented how in their country they pick up people all the time off the roads and help take people to where they want to go but when they tried to hitch in America it was impossible.

So they knew our struggle and instantly wanted to help out.

I spent the day hiking alot with powerade and Colby Jack.

New York is alot of short ups and downs. It feels more like a roller coaster than the deemed roller coaster we had in Virginia.
Quickly our clean laundry smell has dissipated with all the elevation.

Its strange being in the woods all the time. Our senses are heightened and when we walk by day hikers they have such a strong clean smell. We can literally smell their laundry detergent when we pass.

Today I had my first huge fall.

Like foot becoming stuck in a tree root /I am flying kind of fall.

I went forward and threw my trekking poles in the air. It was a show. Thankfully I still had a little arm muscle Left and could hold myself up instead of face planting with a heavy pack.

Of course I thought it was hilarious. Powerade was behind me so I was happy I could enjoy my laughter with someone. However I really wished he got it on film.

Later in the evening we had come to a lake.

It said no swimming or camping was permitted but as soon as we arrived people were swimming and  tenting.

We got in the lake and it was perfect temperature water.

We swam a short distance to the other side and some large rocks and a fellow said the walk challenge is to swim to the middle island.

Colby Jack looked at powerade and I and said should we?

So Colby and I made the swim to the island.

Once there we immediately wished we had snackies to munch on.

We swam back and found planner had made it too. 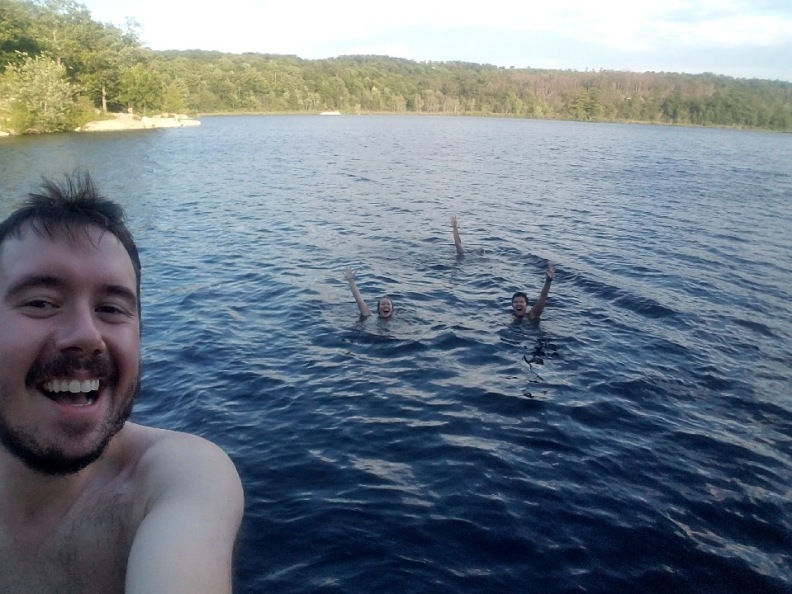 We still had some miles to hike so we got out and continued on.

Powerade had chatted with a man while we were swimming and before he left let him grab some beers from the back of his car. So Colby and him grabbed one for all of us.

Cheers!!! What A solid day.

In less than a mile we came to what was known as the lemon squeezer.

It was quite hilarious. The walls tilt and the further you walk the more you and your pack seem not to fit.

After that there came a climb that almost seemed impossible…

I swore I was going to fall backwards but we didn’t and we made it.

We made it to camp site pretty late, close to nine. But it is always worth it to take time for a good swim.

Sun was out and shining this morning and the weather felt lovely.

We planned to only do a 17 mile day so we knew we had plenty of time.

Quickly we ran across blueberries galore!! 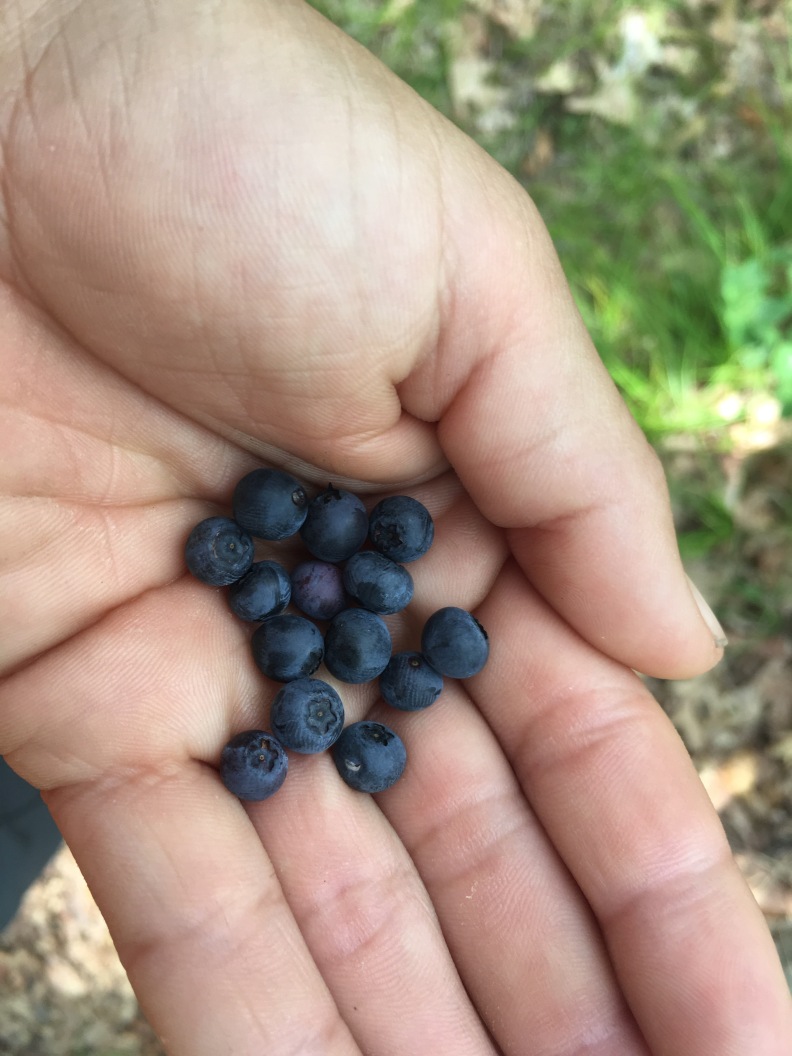 We continued on and found ourselves at a view that faced the Nyc skyline.

Planner pointed it out but it took me a second for my eyes to really see it.

It completely took my breath away.

It looked so huge even far away on a mountains. I couldn’t believe my eyes. Then I started thinking how I will be there in just a few days. I think my mind is going to explode.

Alex, Planner, Powerade, Colby Jack and I all met back up at Bear mountain monument. It was loaded with visitors.

We arrived at bear mountain recreation area and it felt like I was in another world.

There was So many people and so much diversity. 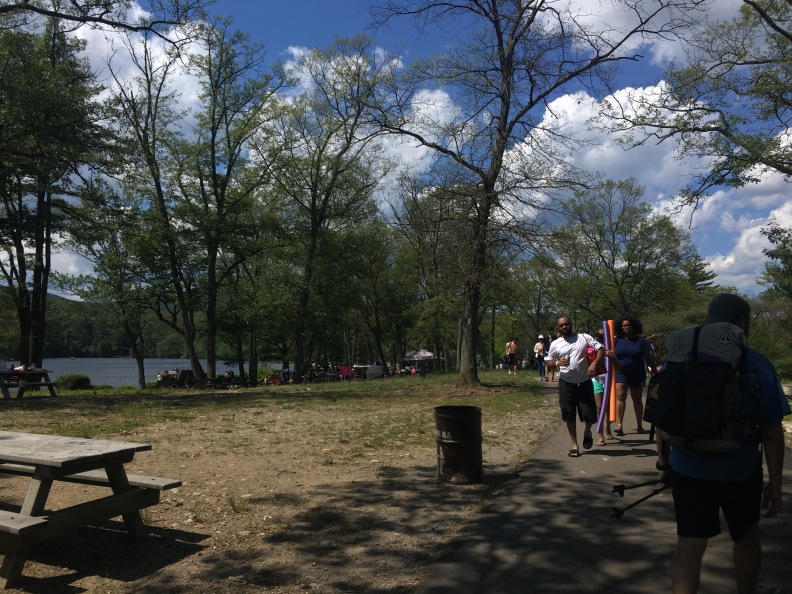 There was also So much trash.. It boggled my mind. We carry our trash in our packs and these people have trash cans right next to them and they still can’t put it in the trash….

The trail took us through a small zoo. 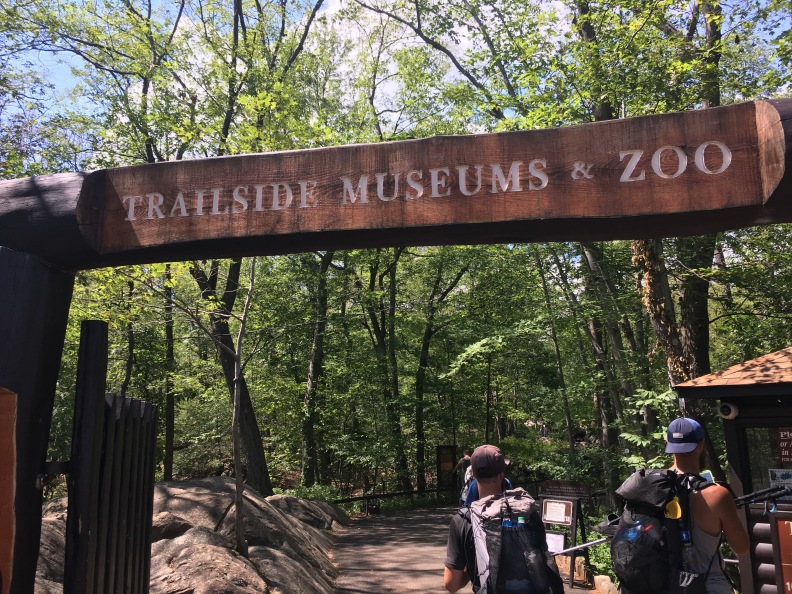 I felt different about seeing this zoo.

I usually love them. But seeing the animals in the wild and then seeing them locked up made me unfortunately sad.

From there we crossed a huge bridge that went over the Hudson.

About five miles later we went right next to a deli and I ordered the Hiker delight sandwich.

I don’t know why… But it was the best tasting sandwich in the world. I could of ordered another one

A Man came up to us and asked if we were thru hiking.

“That’s awesome! I am planning/wanting to hike next year!”

He then proceeded to ask us questions about the trail and listen with excitement to our answers.

The passion pouring from him as he was hearing people talk about his dream. You could see the joy in his eyes.

I was smiling ear to ear…

That was me. I asked those same questions. I had those dreamy eyes.

And now… I am on the other side. I am answering him.

I have been living my dream for the past three months….

This is just too cool.

We ended our night at Graymoor spiritual life center.

They had an old baseball field that we could tent on and a shower! It was freezing but I at least could put a limb in one at time.

I am now laying in my tent with the rain fly off and clear skies. Some of the stars are already starting to creep in. I love it.