“The people you meet” is deemed one of the best things that happens to you on the trail. You meet so many like minded, sincere people it is unreal.

However I also think one of the best life lessons the trail teaches you is the beauty of letting go and letting it be.  This is something that Tia and I talked about for a little bit while she was on trail with me.

I meet so many people and I have slowly realized, to take it all in, to fully engage with that person for however long, because it could be the last time you see them.

To let that person have a presence in your life and to not hold on with a firm grip that they don’t go away. To let them come and exit when they need to and/or when you need them to.

You start to learn how to roll with the punches and let life be. To let this adventure play out before you and hold on to the ideal that the big man upstairs has a plan.

For those of you wondering if I am still hiking with Planner, the answer to that is no.

On Tias last day Planner chose to hike on and meet Alex instead of staying with us.

There were slight tensions due to the relationship forming between the two.

I came out here for me.

Everything happens for a reason.

Of course it hurt that she chose to hike with him instead of me but you know… You men have a way with words. 😂

I am happy for them and I wouldn’t take back the past 3 months spent with Planner.

Planner is one of the most kind hearted, strong, genuine people that I have ever met.. someone who has such a beautiful soul, I get to thank the trail for meeting her. Ill never forget the day I met her and the silent hope she would want to hike with me. Instant good vibes poured from her. I am excited for her growth on trail and even more excited to see what she does after the trail because I have this gut feeling it is going to be amazing.

We still communicate and will be friends for life. And who knows maybe we will see each other again on the trail and well maybe not.

It is the absolute beautiful part of the trail.

I cannot wait for what the rest of the trail has for me and the people on trail who will come and go in my life.

Tom was such a sweetheart this morning. We woke up with a picnic table loaded with bagels, donuts, fruits, and coffee. My heart was full with this mans generosity. He had been doing this for 37 years. It was so neat to hear about all the people he has met. 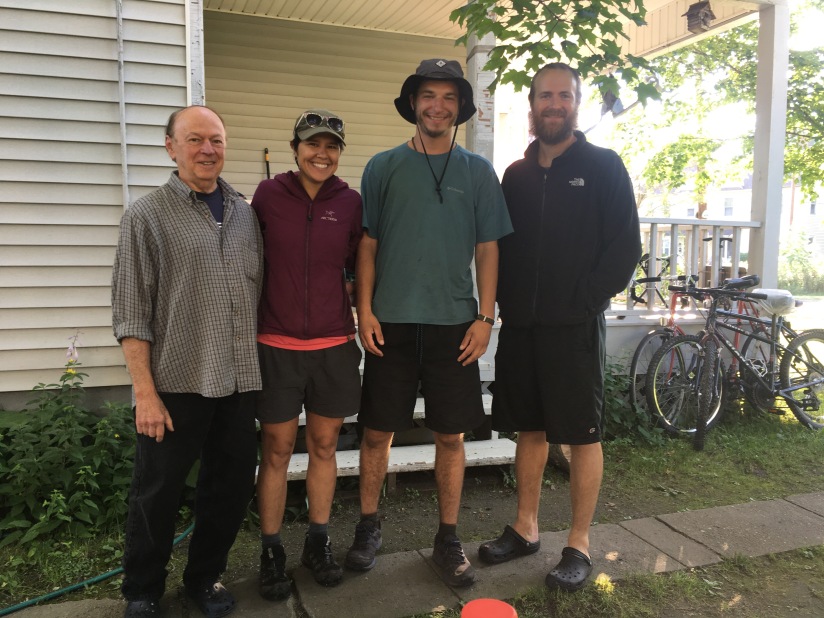 I loaded up on food and decided it was time to head out to the local coffee shop to do some writing and facetime my parents.

We hung out there for a while and didn’t start hiking till around 10:30. Woodpile is the epitome with going with the flow. His chill demeanor is my favorite.

No rain, just gorgeous, ideal hiking weather. I became unmotivated though because it was a weekend day and after sitting in a coffee shop for a couple hours… All I wanted to do was sit there all day and read a book and/or write.

But, we needed to put some miles in.

Midday we ran into some trail magic. YAY! It had sodas, beer, and some fruit.

Just what I needed before our big climb. The first climb since Virginia that goes over 3,000 feet. The highest point on the trail in Massachussetts.

I downed a beer, put my headphones in and played another Rich Roll podcast where he interviews the man from Fun for Louis. (Great Podcast) It was 2 hours and 22 minutes and I had a 7 mile uphill climb. It was my motivator to finsih the climb in that time.

I zoned in on the podcast and took off. Before I knew it, the podcast had ended and I had .7 left to go. Right on!

I was feeling good, mentally and physically.

I hit a couple gorgeous ponds.

I reached Greylock and it was quite beautiful. I was so happy to be climbing up high for gorgeous views again. 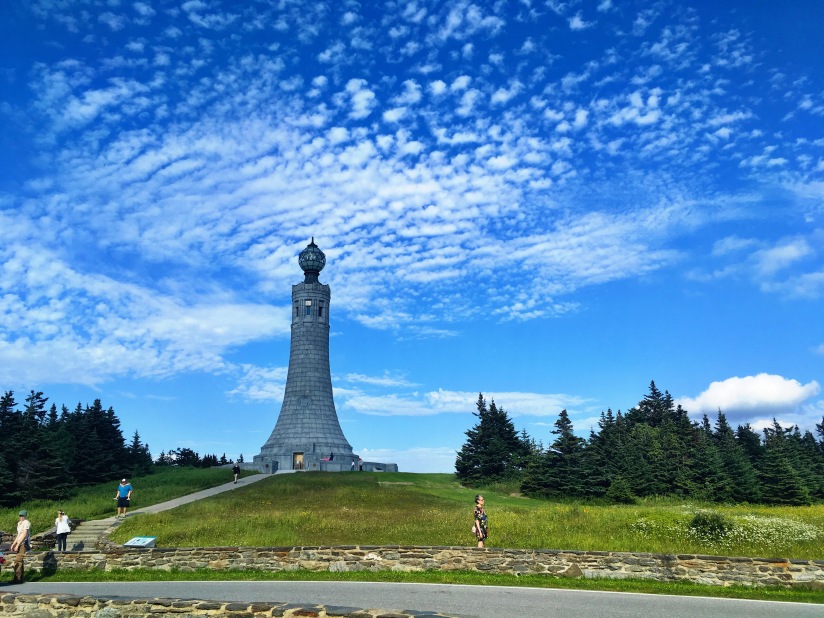 There was a fancy pancy lodge and diner up on top where people were walking around in fancy clothes. I felt a little out of place but Woodpile and I headed in to the little shop and got some celebratory beers. 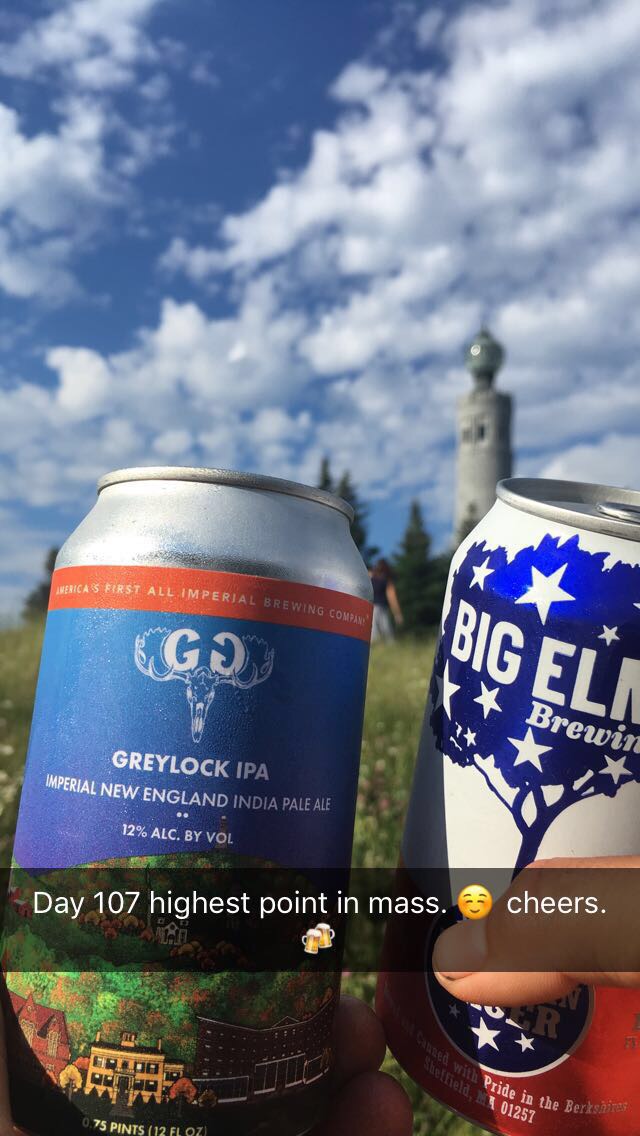 Cause…thats just what you should do when you reach a summit and there are beers for sale. Celebration beers. It makes perfect sense.😉

While up there I officially met (had seen a couple times on trail) a guy named tumbleweed who actually has spent the last five years in Kansas about two hours from me! How crazy is that. He said he didn’t recognize me at first but then saw Ozzy’s eyes and instantly knew he had seen us before. I knew Ozzy was unforgettable. 🙂

Even more crazy was he was hiking with his sister who is 8 years younger who got him to come out and do the trail with him.

I laughed and told him about how i started out with my older brother who is 8 years older than me that I asked to come out with me.

It would of been ironic if my brother was still with me.

They were a fun bunch and we all hung out and watched the sun setting. 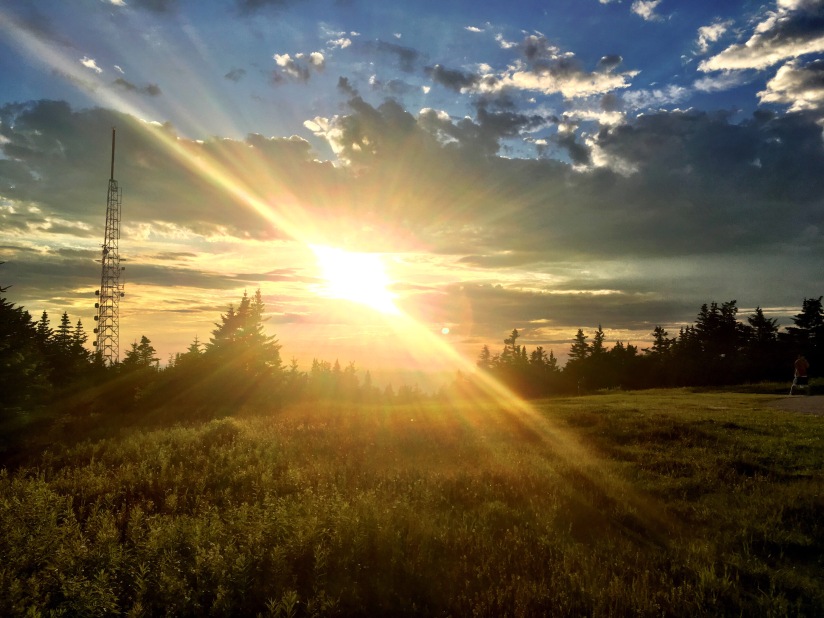 It was just a perfect way to spend my evening.

We drank a little more celebratory beers than we should have and we still wanted to do 3 more miles to the next shelter.

So we geared up and I headed out first and Woodpile was to catch up since he is fast.

The sun was setting faster than I wanted it to and I quickly realized I was going to have to pull out my headlamp.

I did as such and then quickly realized that my battery on my headlamp was running out and my light was hardly shining. Great.

thankfully I had just charged my phone and had plently of battery so I put my flashlight on and stuck my phone in my sports bra just enough so it could light up the path in front of me.

I night hiked the last three miles by myself as Woodpile never caught up.

it was SO exhilarating. I was loving it. Whether it was the beer that gave me courage or just being used to trail life. I wasn’t worried about hearing anything in the woods. The trail was different and so enjoyable even if I stumbled over rocks a few times. 🙂

Woodpile and I will meet up in the morning I am sure since he still is not here.  For now, I am TIRED. A solid glorious 20 mile day.

Sleeping in was a must this morning. I got ready around 7 and went to get water and from afar I heard a whistle.

A smile crept on my face, I recognize that whistle. And surely enough here comes Woodpile.

He had got turned around last night and ended up setting up his hammock near trail.

We headed out around 8:30 and planned to do 3 miles into North Adams, Mass. Here Woodpile was going to resupply and we had heard that the papa johns nearby gives 50 percent off to thru hikers.

We arrived early and had to wait an hour or so for them to open.

But totally worth it. 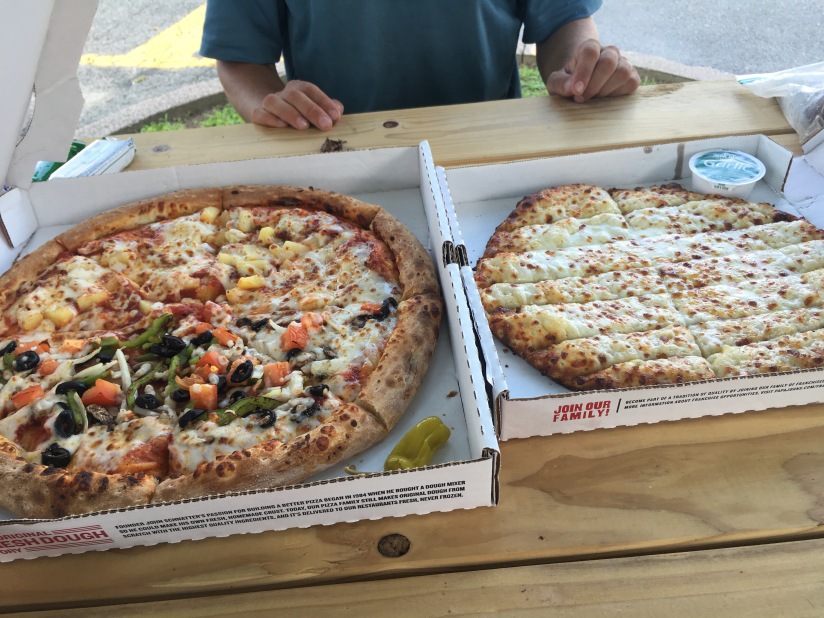 We stuffed our faces then headed out.

After about 7 miles we hit the Vermont border!!

Vermont is known for its muddy trails and is called Vermud.

Quickly I could see why. Frequently we had to step through huge spots of mud. A few times I slipped off rocks and my shoe was eaten and sunk slowly.

Playing hot lava on the rocks was for real this time.

Vermont is proving to already be lush green and beautiful.

I hit a point today where I stopped, looked around, took a deep breath, and smiled.

We hiked a solid 17 miles and got our tent and hammock up before the rain started.

Currently it is starting to storm but it isn’t keeing my eye lids from becoming heavy.