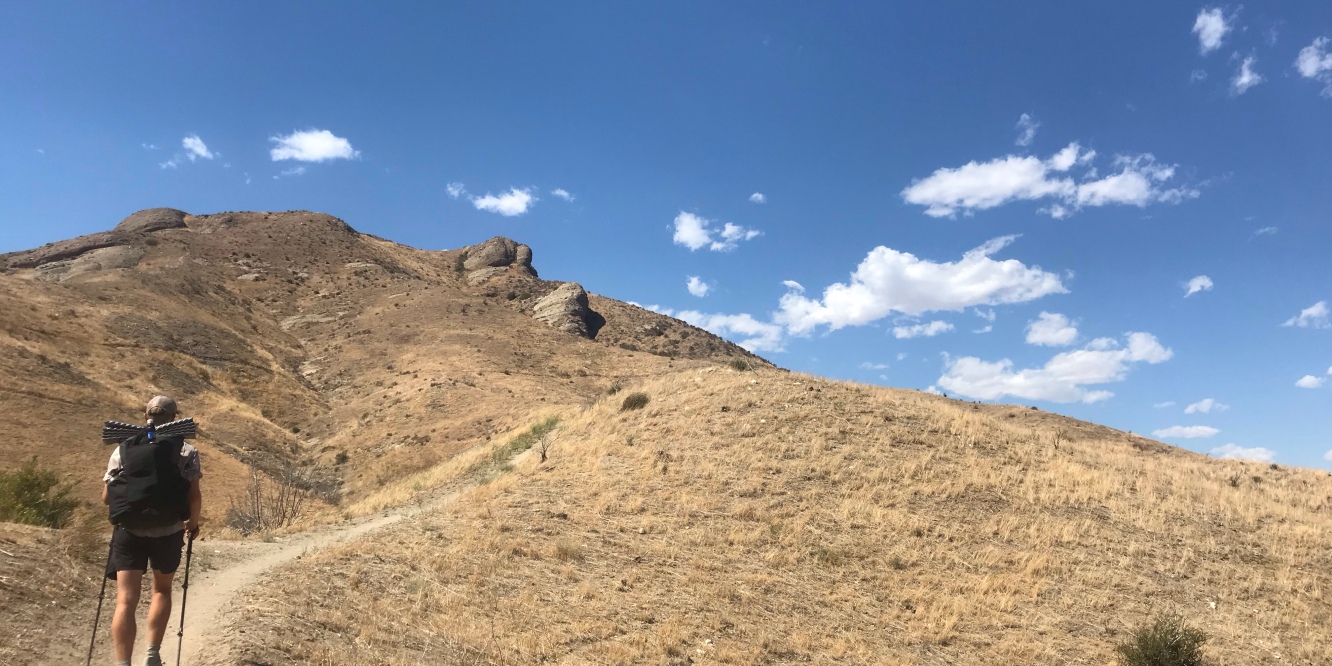 Cowboy camping may be the new thing. I slept well being boxed in by the tramily (I immediately called middle, like I do) However, we all woke up to our sleeping bags being wet with dew. It appeared that we were in a valley that collected some moisture in the mornings.

We also were able to sleep in since we only had 4 miles to a nearby KOA and it didn’t open until 9 am.

I took my time and decided to make some coffee for Bottleneck and I. Unfortunately, I was too lackadaisical. I sat the stove in between Planner and I’s sleeping bag and while it was on, turned the other way and my sleeping bag ended up hitting my stove and burning. Thank God that it only made a small hole and I was able to stop it before all the duck feathers went flying out.

I am so incredibly lucky that I had some patch tape to fix my sleeping bag. I now know to leave plenty of space between my stove and sleeping bag. This will hopefully never happen again.. 🤦🏽‍♀️

We all sat around eating breakfast and drinking some coffee and around 7:15 decided we could head out.

All of us walked together this time and enjoyed getting to know more about one another. It made time fly and we arrived at the KOA in a flash.

The KOA was a mad house. Almost instantly we all felt extremely overwhelmed. There were so many people around because of Memorial Day and they were bustling to get packed up and leave.

All we wanted to do was pick up our packages but it proved to be a task. There was one lady handling all the customers so we waited in line for a while. Luckily, both my packages arrived on time!

Thank you so much to my sister Carissa for being in charge of my packages and thank you to my parents for sending an impromptu package of socks and goodies!!! So much love to you all!

We all started to restock our bags and quickly noticed that we had way too much food and our bags were overloaded. It then became a game of what can we eat now and what can we give away to someone else.

By the time we were anywhere near ready it was 11:30 and we decided it was best to stay at the KOA and wait out the heat. We were at a lower elevation and the heat was outrageous.

We found a nice gazebo with outlets to charge our electronics and relax out of the sun.

Eventually a group of hikers told us to come to where they were as they were grilling burgers and hot dogs and giving out beers.

It was nice to have a burger but all of us quickly headed back to our “private” gazebo for rest out of the heat. We were still looking to complete some miles later in the evening so partying wasn’t something we were interested in.

We headed out at 3:30 pm knowing that it was going to continue to be hot for another hour and half but we wanted to do another 10 for some Mexican food!

I mean it when I say it’s the little things like that that keep us trucking along.

The tramily headed out and most of us stayed together at the beginning and then us 3 girls hiked the rest of the way together. It’s been very enjoyable having Bottleneck hike along with us and keep us motivated.

The ten miles felt like they flew by. Towards the end before we started walking through the town of Agua Dulce, we walked through some amazing canyons and views. So many times I wonder where I am and where this trail is taking me.

We walked through the small town and assumed it was all rich people right out side of LA as we were passing nicer homes and horses. 😂

We got to the restaurant and the staff was incredibly nice to us as they were familiar with hikers. They let us know where the restrooms were and that if we wanted to charge our devices we could. They immediately brought out water and chips and salsa and let us know that when we are ready, they will fill up our water bottles. It felt so nice to be catered to.

We ordered some food and I split some nachos with Planner. We were all hesitant because we had such big food bags but… it’s hard to pass up Mexican food.

Around 8:15 after finishing our food and allowing the sun to set, we decided it was time to hike out.

I felt like we all had this adrenaline surging through us. It was the first time night hiking on this trip for Planner, Bottleneck, Tide, and I.

We also only had 4 miles to go to a campsite so we weren’t going to be staying up late. The first 2 miles were on a paved road and then dirt road before we were back on the trail.

I was a fan of the night hiking. It was so much cooler which made the climbing easier.

We also saw a “Kangaroo Rat”! I personally had no idea these existed but was thrilled to watch it!

It hops just like a kangaroo and has a long tail but in a chunky mouse body! How wild!

We reached the camp site after 9 and were quick to set out our sleeping pads and bags to sleep. Cowboy camping is so much easier than setting up a tent. I’m a fan or maybe just lazy. 😂

It felt like a very long, unusual day but we were still able to get a nice 18 miles in so I will call that a win!