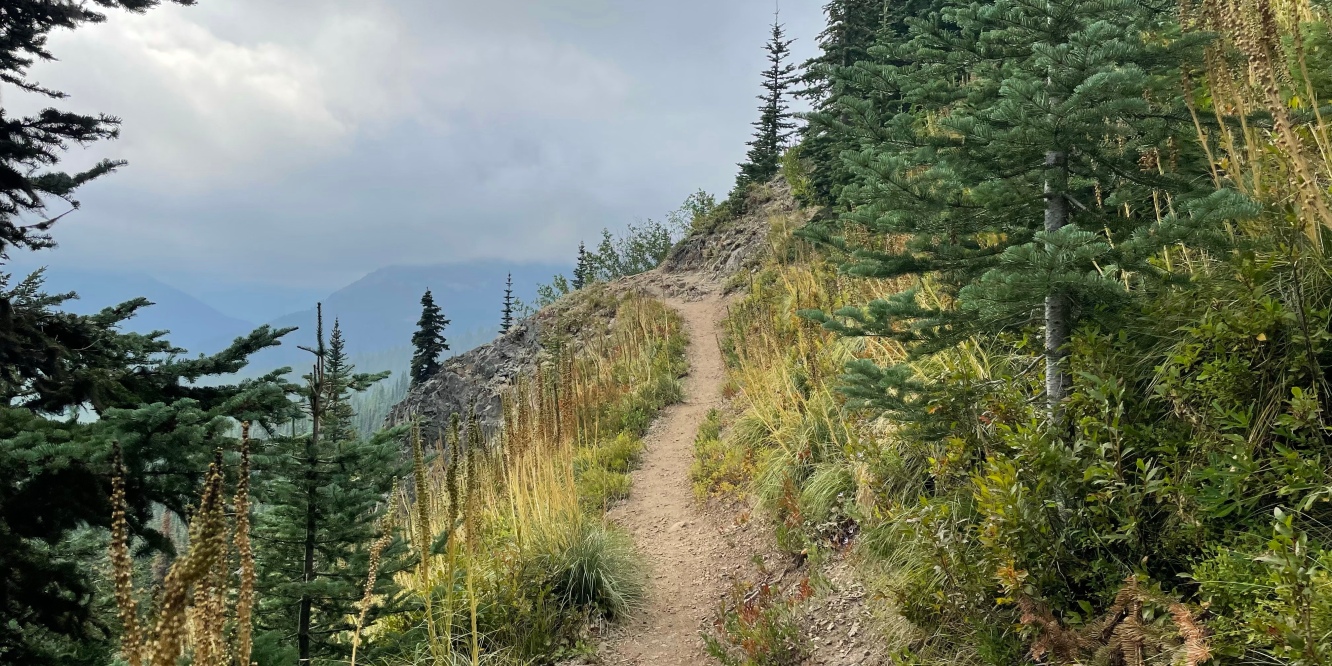 Such a chilly night and morning. I slept in cuddled in my sleeping bag and close to 6 am finally got up. It was time to endure the cold and head out for some miles.

Planner and I found ourselves hiking fast to warm up our wet feet. Stopping seemed out of the question for majority of the morning if not for a brief second. It was frigid!

For one of those brief seconds, Planner and I stopped to pee right off the trail. It didn’t seem like anyone was around us and the heavy fog kept us from seeing too far anyways.

As I was squatted down, bum facing one side of the trail, I stood up, pulled up my pants, turned around, and was facing an older man. He had his hands in his jean pockets with a smirk on his face.

“Oh sorry! It felt like it was just us two out here!” I exclaimed.

“There are a lot of people out here.” He replied with a smile and hiked on merrily without stopping.

I wasn’t embarrassed per say, I was more so shocked how I didn’t hear nor see the man and then questioned why he didn’t pause down the trail and look away till I was done?? This is what most us thru hikers do. I later thought about it and hoped he enjoyed the show. 😅

Late morning the trail took us by many small ponds that looked cool with the fog rolling on top of them.

The clouds and fog were all around us for majority of the day. I wonder what views I am missing, but I also find it incredibly beautiful still.

We also hardly saw any hikers throughout the day today. I found myself wondering where all those people in the tents went. Were they all hiking southbound? Was there a side trail they all came in on?

Around 12:30 I found the perfect spot for lunch where we could all lay out our tents and sleeping bags to dry from the night before. It was the perfect lunch spot and the sun was actually shining through. I could finally see some clear blue sky.

The shining sun only lasted for about an hour and then it hid again, making us almost instantly cold. Our bodies are not used to this kind of weather at all. We have been dealing with so much heat for months!

Around 2 we continued on our way down the trail for another 13 miles. We had to make today a bigger day since we weren’t able to get many miles done yesterday.

While sitting at another water source we met 2 day hikers and one of them told us that the trails used to not have so many people on them. We could tell she seemed a little bit bitter that there were now so many people. I could side with her though, that would be overwhelming if I was a local.

Toward the end of the day we passed over Cispus Pass. For most of the climb we were in a cloud and unable to see anything.

However, once we got up on the ridge, the skies opened up and I gasped at the mountain that was hidden behind it.

I had wished for a clear day to see more of it, but felt lucky that the clouds had let up a little bit!

We unfortunately ran into the same issue as last night; so many people tenting where we wanted to. It seemed like any of the scenic areas were going to be surrounded by people. So we had to hike on a little bit further to find a spot than we had planned.

We are still nearby a lot of people but at least there was a little spot for us.

Later night than we want but what can we do!

Time to warm up in my sleeping bag!