Started out the morning slow. It was rainy and I knew it was going to pass so decided to relax and sleep in.

Set out around 9 and was initially irritated…. Aunt flow came to visit and that is never good news.. Especially when you are backpacking.. 🙈

Along my hike around noon I hear this loud music and loud foot steps coming up behind me.

I stepped to the side to let this person pass for fear of being trampled. I see this huge 6 foot something man with a cowboy hat , missing a tooth, and tattoos, hiking towards me With blaring music. I thought  “oh here we go”.

Then, I realized, I know this song… And started humming along… It was a Christian song.

So I said hey that’s a good song you got playing… And he said “yes indeed! I am a Christian man!”

I responded that, that was good and followed suit behind him.

We started talking and he Goes by Big Jim and eventually he told me that he has actually been walking from Flordia… (Wait. What?)

He said that he was hiking to bring awareness to addicts and recovery. He had these big dreams of what he wants a rehab to be like and essentially is fundraising for it.

He claimed that God really changed his life and if he can change his, one of drugs and hate, that he could change anyone’s.

We continued walking together.. Mind you I had to take almost 4 steps to his one, but I wanted to continue talking with him…

Then. He stopped. Dead in his tracks and turned around and looked me dead in the eyes and said..

“Izzy, I can finally smile again”…

“I can finally cry”…

He said “I can feel again”

Then turned around and kept hiking and talking.

Who was this guy?

My eyes started to water. This stranger. Out of no where, who comes from a completely different background than me… Had such similar outlooks on rehab and our dreams of what it could be…Having a mother myself who was/is an addict… He hit home and I was so happy to have met him..

We hiked most of the day together… He kept saying I was a beast at the uphill.

Then towards the end of the day he said ” You have such little legs but you are like the Hulkett!!”

I laughed hard and said… Oh should that be my trail name?!

Jim plans to walk and walk until he makes his dream rehab place a reality…and Jim. I really hope it comes to fruition. You are a good man. I was blessed to have met you.

I ended my hike at Max Patch where I was to be picked up. I was told it was a beautiful spot by quite a few…

As I near… I started to become anxious and excited with what I was about to see. I just about ran up these last few steps…

I could not believe my eyes. Full 360 view of gorgeousness.

I have a ton more pictures… I literally couldn’t stop…

I plopped myself down and enjoyed the views.

Lembas. A fellow I met a while ago made his way to the top. He decided to hang out for a couple hours till he headed to the next shelter. It was a blast. We got out some good food… Aka…he had oreos. We talked and laughed about everything. Even got him to tell me about his proposal ideas he has for his girlfriend.

I sure do hope to see him later on the trail again since I am getting off for a couple days!

He left and I continued to enjoy the unreal views. A storm started to come in so I found a little bit of shelter down the hill while it passed.. After an hour or so, most of it seemed to go away but it was still raining. 3 college students pulled up to take sunset pictures. I looked back up to Max Patch and a rainbow was forming.

I started to run, skip, hop, whatever you want to call it back to the top of the hill. I had no care that it was still raining. 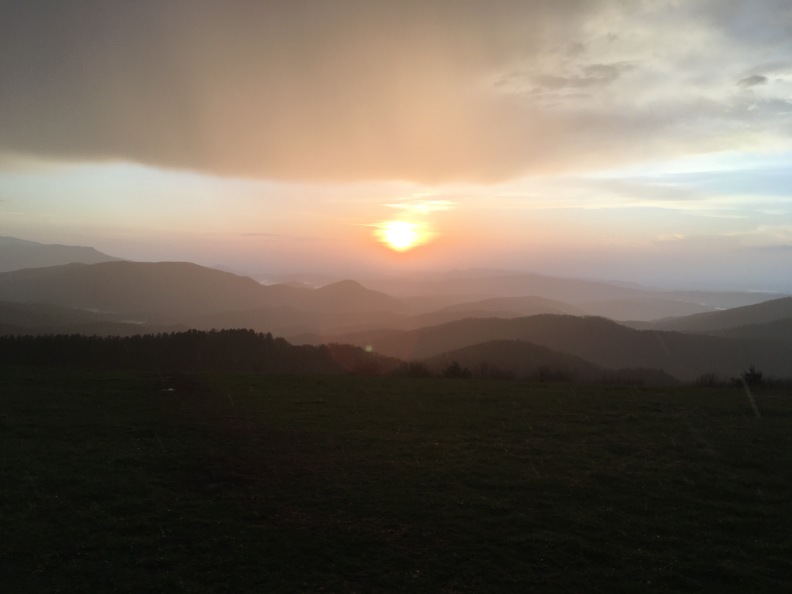 I was on top of Max Patch dancing in the rain.

It was a phenomenal day.

My sister wrote me a note before I left. I couldn’t open it till I got on the plane to Atlanta.

I read this note almost every night before I go to bed.

In it… She says.. “I hope your heart screams with joy”

Carissa. Today. My heart was screaming. It was so happy. I am making this dream a reality… And I am on cloud nine. 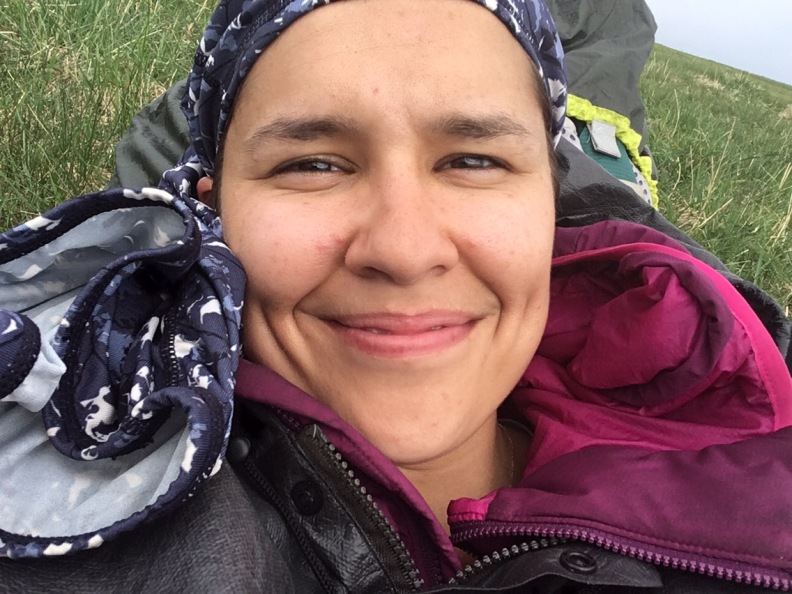 I will be in Knoxville taking a couple zeros with some friends. relaxing tomorrow and Friday. Rightfully deserved.

It is LATE and way past my bedtime..